http://flwrider.com/2011/04/25/frame-chapter-twenty-five/
Click on the link above to watch an interview with Lim Soo, a new friend I met while I  was in Hong Kong.  See more about my ride with him while I was there here.  He started a blog last fall about his bicycle commuting experience for 190 days on his brompton folder; www.i-brompton.blogspot.com
The interview was done by the great folks of flwrider.
Cycling in Hong Kong is going to improve over the next few years.
Posted by Matteo at 9:47 AM No comments: 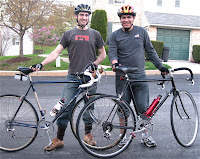 Matteo/Lazaro
Meet my new friend Lazaro.  We met when I bought the Royale II from him about 2 weeks ago.  He has been riding a Supreme.  He painted it black.  It looks okay, but the original paint was fine, and the fuji logos were all good too.  I think he regrets doing that after seeing this blog.  But it is not what is on the outside that counts, it is what is on the inside, and underneath the black paint remains a quality vintage fuji.  Both of these bikes used to be his father-in-laws, but as I've said before they are getting new life in our hands.  I've been helping with some mechanical issues on his bike.  We've put a different crank on, a different chain, trued the wheels a bit.  It would be nice to rebuild the wheels with new spokes, and I want to redo his brake set up if he'll let me, get them higher up on the bars.  We took them around the block for a fast test spin, and hopefully we'll get out on a nice long road ride soon.
Posted by Matteo at 10:34 AM No comments:

Vertex: A Chain, A Frame, and 2 Wheels

The 80's Fuji Track frame I've recently acquired was sold to me with a chain, however, sometimes I like to put new things on my old bikes.  I want to set up this track bike as well as possible.  I didn't want to leave a used chain on it.  In searching the web for a track specific chain I found this one.  However, I wasn't finding that it was sold in my immediate area, and to have it shipped from somewhere in the U.S. would have cost just as much (or more) than having it shipped from Japan.  I went ahead and purchased it from a track-specific shop in Japan, Track Supermarket.  I ordered it less than a week ago, and wasn't expecting to receive it for at least another week and a half.  That was fine with me, I'm in no rush and it's half way around the world.  I was excited when it arrived though.  I'm one step closer to getting this bike ready to ride.
Another cool thing about putting it together is that I found the perfect wheel set for it within days of getting it.  Instead of spending over $600 (for a hub set, rims, spokes, and tires) and then take the time to build them, I only had to spend $270 (including shipping!) for a complete set of wheels with Sunshine Professional track hubs (110mm rear) and Ukai rims.  These are actually the ones that came original on the Fuji Track bike in 1982.  This is all thanks to Abbas, who had posted them in a classified ad over 7 months ago that nobody ever responded to (until now).  It is like they were waiting for me this whole time.
'Vertex' is the name given to the chain I just bought.  Some definitions of vertex are: 'The highest point,' 'The point at which the sides of an angle intersect,' 'The point of a triangle, cone, or pyramid that is opposite to and farthest away from its base.'  There are others, but the main idea is that it is referring to a point of convergence of two (or more) separate entities a fair distance from their starting points.  These parts (frame, chain, wheels) for this track bike are converging from different places (New York, Texas, Japan) to form the whole of the bike itself.  Pretty cool.
I still have to put the headset back together, purchase the cogs and lock rings, maybe buy a new crank and bottom bracket, then it should be ready to go.  Stay tuned for more updates on its progress.
Posted by Matteo at 3:59 PM No comments: 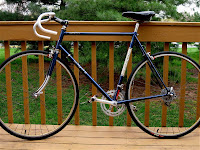 I used to own an '82 Fuji Del Rey.  I gave it to the Charlottesville Community Bike Shop almost a year ago because I had swapped it out with a smaller Gran Tourer I found.  I thought the Del Rey was too big for me, and that the Gran Tourer would fit me better.  I was wrong.  I began to regret giving the Del Rey away, and began missing it.  I didn't realize how much it had grown on me.  I even missed the yellowish color of it.  After moving here to Pa, I saw a picture of the Del Rey in a craigslist ad, at least I thought I did.  That was last November, but I didn't really need it, even though the asking price was very low.  My youngest daughter was only about 7 months old then, so she couldn't be in the child trailer yet.  Well, she'll be a year in only a couple of weeks.  The Gran Tourer is still down in Charlottesville.  Also, we're doing Bike New York in a couple of weeks.  I don't want to use my Fuji Touring Series IV at Bike New York, just in case something were to happen to my bike, and I don't want to use it to pull the child trailer on a daily basis.  I have bigger plans for that bike in the future, like taking it cross country at the very least.  So I want it to be in tip top shape.  I still had Lazaro's contact info, so got in touch just a couple of weeks ago to see if he still had the Fuji.  He did!  Except it wasn't the Del Rey like I thought.  It was the Royale II.  I used to want the Royale II actually (in the beginning of all this fuji craziness), so it was kind of a pleasant surprise.  I like the gold rims, and it also has quad-butted Ishiwata tubing like the Del Rey I had.  They are similar in many ways.  It is going to be a better fit than the Gran Tourer, and should serve me well as my new work horse bike, hauling the girls in the trailer and taking us anywhere we want to go.

Epilogue:  I've recently seen Lazaro since he sold me the bike.  I helped him with some mechanics on his Fuji Supreme.  These two Fujis (the Supreme and Royale II) used to be his father-in-laws' bikes.  They are getting new life in our hands.  Lazaro and I have plans to see each other again, and eventually our wives and children will meet.  We definitely plan on getting out on a ride together.  It is just another special element of these older Fujis, how they can bring people together.
Posted by Matteo at 3:36 PM 1 comment:

No More Headset Fret or Regret

I've recently acquired two older Fuji models, the Royale II ('83) and the Sports 10 ('76).  Well, when I went to remove the headsets to clean them, my 32mm wrenches did not fit!  I was perplexed by this because I thought all headsets were that size.  The 32mm was just a bit too small actually.  Google came to my rescue (like usual, is that bad?).  I discovered that Park Tool has made in the past, a headset wrench to fit the nonstandard headset lockring and cup race sizes of 33mm and 34mm, which is what these two are that I've acquired.  After some searching on the web, I was not able to find this park tool model (HCW-8) though.  However, a quick call down to one of my area bike shops, Auntra in Phoenixville, solved my problem.  Joe down there had one, thankfully, and at a good price!  I was very relieved, and it felt nice to be able to remove it properly without having to go through some kind of rigmarole.  So, if you run into this same problem, don't despair.  First, measure the lockring to be sure it is in fact 33mm, and start looking for this wrench.  I did find one at MountainBikes.net by a brand named zogs, so maybe you could try that one, and let me know how it is.
Posted by Matteo at 3:22 PM No comments: 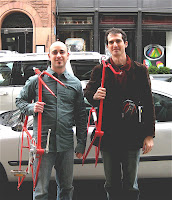 Jeffrey/Matteo
walking through SoHo to Lombardi's Pizza
I found it!  I've been waiting to come across an 80's Fuji Track frame for a while now, and within one week of being home from Hong Kong, I found one on craigslist in my size (55cm).  The seller, Zachary, was in New York, SoHo neighborhood, so I had to make the trip up to get it.  Thankfully, my friend Jeffrey was able to go with me, and if he hadn't I wouldn't have been able to bring back the surprise extra fuji frame (1976 sports 10 model) that Zachary wanted to give me after seeing this blog.  Also, he was a great navigator on the way up, helped with the metro issues we ran into, and led us to Lombardi's Pizzeria for dinner after we picked up the bikes.  The restaurant graciously stored the frames in the closet while we ate.  A person behind us was telling his wife that this is what they do in New York, take their bikes inside while they leave the wheels locked up somewhere on the street.  Funny.  We drove up to the Trenton Transit Center, and then took the Jersey Train into New York Penn Station.  From there we took the metro down to SoHo.  It was a fun trip to make, and definitely worth it to get this frame.  I will be acquiring the parts for it now, and plan to use it for what it is intended, that is at the velodrome.  This is my next step in cycling, to learn to ride the track and a fixed gear.  Now I have the perfect bike (for me) with which to do that.  On the train home, there was one other passenger in our car.  As he was getting off for his stop, he commented on the bikes, and said he had an older fuji too.  He hadn't ridden in a while though, and I think he was wanting to try and sell it to me.  Just another special fuji experience to add to the list.  Where is Fuji going to take me next?  (Japan itself I hope!)
Posted by Matteo at 7:39 AM 1 comment: 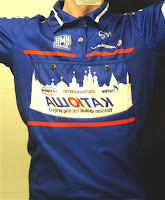 I bought this jersey at Wing's Co. while I was in Hong Kong.  It is the shop to go to for imported European racing bikes and gear.  I really liked the vintage look of it (though it is not vintage), the collar, the front pockets, buttons.  I just now got around to googling this project to see what it is all about.  It is a fairly new Russian team with higher aspirations than just winning races.  Learn more about the team here.
Posted by Matteo at 4:44 PM No comments: