Smart yet Humble and My Gluteus Maximus

This is not actually MY gluteus maximus.
Cycling is very special in that it can keep a person smart yet humble.  As I mentioned in my previous post, I rode to the Philly Bike Expo yesterday.  It was a 30 mile ride.  Pretty early in the ride my knees started to hurt.  I've dealt with this issue before, and thankfully it hasn't been consistent.  However, whenever you feel pain or discomfort on your bike it needs to be addressed.  I began thinking of what might be causing my pain.  Is it the cold?  Is it that my rides are just too few and far between these days, so I'm just weak?  Is it my positioning on the bike?  Am I too low, too high, too close to the bars, too far?  Is my core just not strong enough?  I had to admit that I wasn't going to average above 10 miles per hour, and that I probably wasn't going to be able to ride the same 30 miles back home later in the day.  This is what I mean that cycling can keep you humble.
While I was at the expo I attended two seminars.  The first one was on bike fit presented by David Greenfield, president of Elite Bicycles.  First of all, he was hilarious.  He was very good at warming up a room, and has a special way of connecting with people.  He knows his stuff too, which was apparent from all of the appropriate big words he used for internal body parts.  The main insights I was able to garner from this session for myself personally (apart from having to pay alot of money to go through an awesome fitting session with him) is that I probably had a cleat adjustment to make, and I need to build my butt-strength.  You know, gluteus maximus.  Yeah, its kind of weak back there.  He talked about our muscles having force partners that counteract the movement of the other (like hams vs. quads).  He also talked about how important our vestibular connection is to having good balance.  I have yet to google vestibular.  I have yet to understand fully everything he was talking about.
The other seminar I attended was a presentation on the U.S. Bicycle Boom of the 70's by Greg Honn.  He is the president of Milano Sport, which is a bicycle import company that I mentioned in my previous post.  He's been in the bicycle business for a very long time, and is very insightful and knowledgeable about it's history, inner workings, etc.  I forget what the context was, but he commented on bicycle fit, stating that the 109 percent of inseam is sufficient to achieve the optimum saddle height for any rider.  This was cited from Eugene Sloane's 'The Complete Book of Bicycling,' which was written in 1970.  I have actually owned this book for some time now.  [Here is an interesting Time article from 1970 that mentions Mr. Sloane.]  This scientific saddle height value came from experiments conducted at Loughborough University in England on 100 racing cyclists.  Here is how it works.  You stand straight against a wall (no shoes), and place something sturdy in your crotch, and have it touch the wall.  Mark where it touches the wall, then measure from the floor to that point.  Take that measurement and multiply it by 1.09.  The number you get is the number of inches or centimeters (depending on which you used initially) that the top of your saddle should be from the pedal spindle when the crank is low and in line with the seat tube.
I mentioned already how cycling is keeping me humble.  It is keeping me smart because I have to look at this pain issue and figure it out.  I realize it is a fit issue in two senses.  One being that I could be better physically fit, that is more in shape than I am.  The other is the actual fit of my body on the bike.  I know the frame sizes of my Fuji Touring Series IV and the Opus III are virtually perfect for me.  In fact, they are probably about as close as I could get to a custom made frame without actually going that route.  Sensing that the information I received at the two seminars were little insights into my present issue of discomfort, I utilized it hopefully to my benefit.  The first thing I did was adjust my cleats to match more the natural turn of my foot.  The second thing I did was actually do the 109 percent measurement.  Well, what I came up with after that is that the saddle on my Fuji Touring Series IV, the one I rode to the Expo, was actually about an inch lower than it should be for that measurement.  Initially I had set the saddle height of it at the same measurement (in inches) as my Fuji Opus III, which I had done a fitting on with Scott Paisley at BlueWheel bike shop in Charlottesville, VA.  However, what I forgot to take into account, and just realized tonight, is that when I did that I had on different pedals and shoes.  On those particular shoes were my cleats that added probably about half an inch to an inch of height.  The shoes I was wearing yesterday have recessed cleats in them.  The other shoes added height whereas these took it away.  I am really hoping that it is this factor that is the main cause of my knee pain, and not my weak gluteus maximus.
On a side note, Scott Paisley is one of the co-owners of BlueWheel in Charlottesville.  He and some of his custom frames are featured on the ClassicRendezvous website.
Posted by Matteo at 10:53 PM No comments: 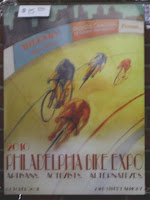 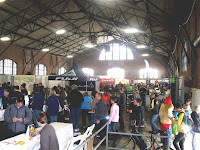 Yesterday, I rode my Fuji Touring Series IV from Collegeville to downtown Philly via the Perkiomen and Schulykill Trails to attend the first Philadelphia Bike Exposition.  The second and final day is today (Sunday October 31st, 2010).  It was organized by Bilenky Cycleworks and the Bicycle Coalition of Greater Philadelphia.  That is Steven Bilenky in the picture above.    Many other small bicycle fabricators were represented at the expo.  Among them were Gallus Cycles, Cedarboro Cycles, Baltimore Bicycle Works, Folk Engineered Bicycles, and Banjo Cycles.  I'm sure I've left out at least a couple.  There is a list of everyone represented on the Expo website.  The big corporate companys were there too like Jamis and Fuji.  By the way, Fuji has a long history that goes back to Japan 1899.  The fujis I ride were made in Japan, but today they are made in Taiwan.  The company that sells fuji now (Advanced Sports) is actually based in Philadelphia.
Let me mention a few other booths that stand out in my mind.  One is Christ Cycles.  They will have a custom, single speed bicycle made for you at low cost, helping those strapped for cash to get on a bike quickly and affordably.  A Canadian company called Velocolour will custom paint your frame.  His display bikes (one an unknown frame and the other an Olmo) were gorgeous.  Beautiful decal work as well.  I saw an outstanding looking Masi frame that was being sold by Milano Sport, an import company based in Connecticut.  The owner of that company also gave a seminar on the Bicycle Boom of 1968-1974 that I attended.  It was very insightful and informative.
Advocacy groups in attendance were the League of American Bicyclists, PA Walks and Bikes, and the Bicycle Club of Philadelphia.  A few shops were there, like Trophy Bikes, and a few independent apparel shops were represented like the Sock Guy, Fabric Horse, and alloneword.  Again, a full list can be seen on the Expo website for others.
I was able to park my bike at the free bike valet of which Neighborhood Bike Works was in charge.  They did an excellent job keeping everyone's bikes safe and secure.  Much thanks to them.  All in all, it was a well attended event.  It helped put bicycling and all of its many diverse facets more in the public eye.  The seminars were informative and professional.
Posted by Matteo at 3:07 PM No comments: 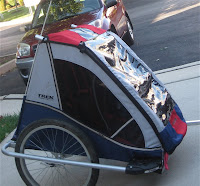 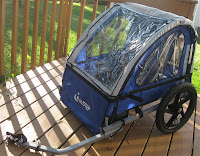