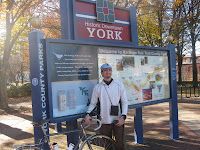 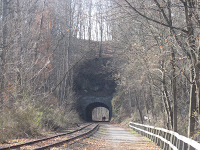 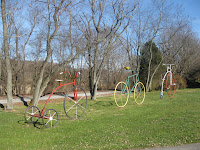 You wouldn't want to sit on these steeds. They are not as trusty as you might think. There are large metal spikes poking up through each of the seats to prohibit people from getting up there. 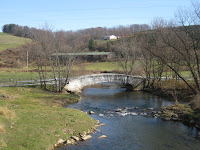 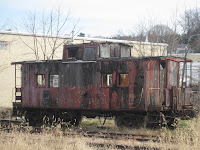 Yesterday I was fortunate to ride two more rail trails: The York Heritage Rail Trail and the North Central Railroad Trail. They seamlessly meet at the Mason Dixon Line that marks the border between Pennsylvania and Maryland, and both run about 20 miles long for a total of about 40 miles. This was a one way only trip for me, and thankfully it worked out that I had to do it going north to south. There is a slight downward grade in that direction.
Even though they seamlessly connect, they are not the same trail. The York Trail is much wider and has a smoother surface. It is a few years younger though. It runs directly next to the rails, which are still active. This is called a 'rail with trail.' One thing I did not think to do before the ride was check the train schedule for that rail line. However, a train did not come by while I was on the trail. There were always houses in view from this trail, so I never felt completely alone. Not many people were out using it, but every now and then I would pass another cyclist or someone walking their dog. I came across one stray dog sniffing along the tracks. I saw him up ahead, and decided to get off my bike. He slowly came toward me, and scurried past in an uncertain way. He must have felt the same way as I did. Based on a few encounters with other dogs while on my bike in the past few months I was ready to get out the pepper spray.
The North Central Trail is starkly different. It is much narrower, a bit of a rough ride (at least at the northern end), and goes through Gunpowder Falls State Park so it is more 'out there.' Remember, this trail is older, built in 1984. I realized that the Fuji Touring Series IV I was on is actually the same age, built in '84 as well. There were times I felt pretty alone (and vulnerable). That feeling never lasted for long though. I encountered more people using this trail. This one is a 'rail to trail,' meaning it was made directly over the old rail bed that used to be there. No dog encounters on this one, but a friendly stranger, Jerry, approached me as I was taking a picture of the I-83 overpass. He noticed my league cycling instructor jacket, and had a question about pedaling technique. I noticed he bought his bike from Mt. Airy Bikes, one of my favorite shops in Maryland. We ended up riding a few miles together and talking before he veered off to where his car was parked.
Despite being pretty chilly, the weather was perfect for a ride. I've realized that if I only do my rides in good weather I'm going to miss some special times. I was ready to ride in the rain yesterday, but am thankful I didn't have to. I was prepared for the cold with proper gear, so it didn't affect me at all. I was very comfortable on the bike. I had plenty to eat and drink and did so every 10 to 15 minutes. I don't get to ride consistently these days, but I was able to find some time in the two weeks leading up to this ride to get in some miles. That helped me tweak my bike mechanically and deal with a bit of a fit issue. The things I did to prepare for yesterday's ride helped it to be successful.

Posted by Matteo at 9:39 AM No comments: Last Sunday, my local bikeshop, Bikesport, in Trappe, PA, held a Pedals 4 Progress bicycle collection event. I went to help prepare the bikes for transport in the truck and containers. They will all eventually go overseas to other countries where the recipients will use them for transportaion. These bikes will greatly enhance their mobility and daily life. I was wondering if I would see an old fuji come through, and at the last moment I did! It was a Sports 10 model from the late 70's. It is not high end, but it is nonetheless a decent, well-made frame that should be able to perform any task asked of it in its new home.

I had a great time meeting more staff at Bikesport, and also meeting Gary of P4P. They are all great people really helping to make a difference.

Posted by Matteo at 9:24 AM No comments:

Chainring bolts and My Inner Voice

I got to go on a 20 mile ride last Sunday on the Perkiomen Trail.  I took my 3 year old with me in her trailer.  I had the feeling before leaving that I should check over the touring series iv, specifically the nuts and bolts to make sure everything was tight.  However, I did not do it.  Don't worry, nothing bad happened and nothing broke.  After about 10 miles though I noticed a knocking sound and feel in the crank, especially as the drive side pedal came over the top.  The immediate thing to check was the bottom bracket.  No, that wasn't it.  The crank arms were secure.  What about the pedals?  No, my cleats were secure, and the pedal spindles were not loose.  Hmmm, I wondered, what could it be then.  I continued riding and thinking.  A few miles later it dawned on me.  Maybe it is the crank bolts.  I should have stopped right then, and checked them, but I continued on home.  At home before putting everything away, and going inside, I finally relented to the nagging feeling I had to check the bolts.  Low and behold, a couple were loose; loose enough to be the cause of a knocking feeling and sound while pedaling.  I was happy to have the problem solved since I like a nice, quiet bike.  The crank bolts usually aren't the first thing to think about when dealing with a problem like that, but they are important.  A crank bolt could be easy to miss if it loosens enough to fall out.  I've seen what can happen eventually if a missing crank bolt is overlooked or ignored.  The chainring can bend and break due to the force that the chain puts on it.  This happened to a patron I worked with in the Community Bike Shop in Charlottesville, VA a few months ago.  He didn't know how his chainring had bent until I was looking it over and finally noticed one of the bolts missing.  Not only did it ruin his chainring, but it also ruined the front derailleur and the chain.  It all broke at once as he powered up a hill one day.  So it could also be dangerous by possibly causing you to fall, maybe even into traffic.  Don't forget the little parts of your bike.  They are just as important as all of the big parts, and some maybe even more so.
Posted by Matteo at 3:02 PM 3 comments:

A Special Gift from Special Friends 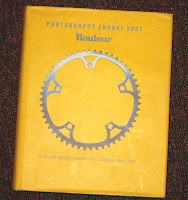 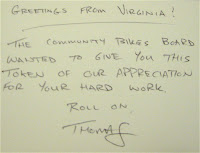 I received a surprise in the mail today.  It is good timing too in that it fits right in with my last two posts.  The book is from my cycling friends in Charlottesville, VA who are involved with the Community Bike Shop there.  I'm grateful to them for thinking of me, and sending this to me.  I miss you all!  They are still there working hard at the shop, and in the community to promote cycling and all of its benefits.  I wish I could still be there with them.  Cycling continues to grow and gain respect in Charlottesville, and it is because of them.  Thank you Thomas, Shell, James, Richard, Chris, Alan, Will, Bryan, Cyrus, and Ashby.  I think of you all often.
It is a book with brief commentary and full of great photos that depict cycling in all of its pain and glory.  Here is a definition of Rouleur.
Posted by Matteo at 9:46 PM 2 comments: 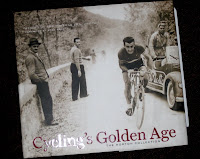 Another of my favorite cycling books is Cycling's Golden Age.  This book has fun facts about racers from before World War II through the 1960's.  It is also replete with excellent photos of the time.  One of the most exciting Tour de Frances from this time period was the one in 1958, in which a cyclist of my namesake, Vito Favero, placed 2nd overall.  He is mentioned in this book in the discussion of Charly Gaul, the first place finisher of that race.  I don't know if we are related, but it does help me feel more of a connection to the sport that seems to have found me 4 years ago.  It makes me feel like cycling is in my blood (however cheesy that sounds).
Posted by Matteo at 4:27 PM No comments: 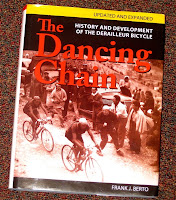 One of my favorite cycling reference books is The Dancing Chain: History and Development of the Derailleur Bicycle by Frank Berto.  If you are going to purchase this I highly recommend getting the updated and expanded version published last year (2009).  Not only is it full of every detail you would ever need to know regarding the bicycle and its components past and present, but it is full of very excellent and detailed accompanying photos as well.  You can imagine how happy and delighted I was to find my very own Fuji Touring Series IV featured prominently in such an exhaustive and respected source.
Posted by Matteo at 4:08 PM No comments: