On the B76 Ride somewhere in the midwest 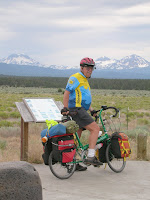 Bill Schroder in 2006.
If you are familiar with Adventure Cycling, then you might also be familiar with the Bikecentennial 76 (B76).  If not, then briefly, it is a large cross country bicycle ride that happened in the United States of  America in the summer of 1976.  Everyone was put into groups, and each group had a leader.  Well, a few weeks ago I was on a ride taking the Perkiomen Trail back to the house.  A man was sitting on a bench holding what I initially thought was a map.  I wasn't going to turn around, but I did, just to check in and see if there was anything I could help with.  It was just a newspaper, and I quickly realized from the look of his bike, that this was an experienced cyclist who knows what he is doing.  Like any experienced cyclist, he also knows how to take his time, and enjoy life.  I took a "brake", and we chatted a bit.  It turns out that he was a ride leader on the infamous Bikecentennial 76!  He gave me a card with contact info, and on the way home I got the idea to blog a brief interview about his experience with that.  He was happy to do it, so here it is!

AN INTERVIEW WITH BILL SCHRODER:

A Ride Leader of Bikecentennial

Question 1.  How did you become a ride leader for Bikecentennial?

I lived in Virginia Beach, VA in the 1970s and in 1975 I was president of the Tidewater Bicycle Association and gave input for the eastern VA portion of the B-76 route.  As a result I was invited to be part of the first leadership training group which took place at an American Youth Hostel in Bowmansville, PA.  From the training groups leaders were chosen based on their camping and biking expertise, as well as their ability to motivate and work with others.  In addition to this training enabling me to be a group leader, I met the woman who has become my lifelong partner and friend.

Question 2.  What were your responsibilities as a ride leader?

Each group consisted of between ten and twenty people of varying ages.  Some groups stayed in youth hostels, churches etc. and other groups were organized to be full camping including cooking.  Also the distances varied; some cycled a portion of the country and some did the whole country.  Each trip was described in a B-76 catalog.  The full country trips took 82 days but there were four “fast trips” cycling the country in 58 days; one each way of hostel and camping.  I was lucky enough to lead the west to east fast camping trip.  Both the hostel and camping groups were self-contained.  This meant carrying on your bike everything you needed; clothes, repair tools, camping equipment as well as food for that day.  We had “group” stoves and gas canisters.  Every day two riders were appointed to cook the evening meal and the next day breakfast.  It made for some very interesting meals.

Each group had a leader and assistant leader.  Their duties varied by their abilities.  All leaders were responsible for the group funds, allocating funds each day for groceries, camp ground fees etc.  In addition the leader was responsible for the member’s wellbeing.  This ranged from motivating riders to bicycle repair, to minor first aid and discipline as necessary.  Luckily in my group the latter was not necessary.  B-76 was the first time this type of trip had ever been done on such a large scale.  B-76 headquarters was unable to provide much support once you left the starting point and it was up to the leader to improvise.  While each member was supplied guidebooks and maps, none of us had ever been in most of the places we were going.  While the group looked to me to know the way, in truth most of the time I did not have any more knowledge then they did.  The leader was expected to use common sense and his abilities to get through.  In eastern KY our maps said to “take a right at the large tree”.  As most people know KY is not a desert and there are lots of trees.  Luckily at what I thought was the turn there was a farmhouse and a nice grandmotherly lady was rocking on the porch.  Her comment to my question about directions was “bicyclists keep going up that road and never come back”.  In summary, the leader did what had to be done on any given day.  Of the 17 people in my group who started from Reedsport, Oregon, 17 made it to see the ocean in VA Beach, VA.

Question 3.  What was the biggest challenge that your group faced together?

When you go on this kind of adventure every day holds challenges, whether it is mountains, heat or rain.  Probably the biggest challenge was to keep the desire to cycle every day.  When we first met in Reedsport in my first talk I told them that it is not possible to cycle across the United States, it is not possible to cycle across Oregon BUT is possible to cycle to the next soda break and the one after that and one day you will find yourself on the other side of the country.  Our biggest single challenge was when we were camped in Ste. Genivieve, MO .  About 2 AM a tornado came through and although luckily it did not directly hit us, the winds still took all the tents down and everything we had was completely soaked.  The police evacuated us to a local church.  The next day became an unplanned rest day as we dried clothes, repaired tents etc.  One vivid memory I have was the $4,000 in traveler’s checks lying in a puddle in my tent.  The local bank said they would replace them but could not until I could separate and dry them.  I still remember giving a hundred dollar check to each lady at a beauty parlor who put them on their heads and got under a dryer.

I believe every person who did B-76 was changed and every person who I have ever talked to, be it from my group of other groups say they will never forget that trip.  One cannot do something like this without having a lifetime of memories.  Some of us have continued to do trips and keep cycling while others have moved on.  But I doubt a single one of us will ever forget it.  To this day what four of us still keep in touch and my best friend from that that trip, a “young” Dutch man; not so young now goes on regular cycling trips with me.  He, my partner and I have cycled throughout Europe and the United states together over the last 30 plus years.

There are too many to ever tell about.  There was Gene Chu buying a ten pound bag of ice each day and putting it in his front handlebar bag in the desert of eastern Oregon.  There were two of our younger riders riding into wet tar and then braking with the expected consequences in Kansas.  But the best memories I have is meeting the people along the route.  B-76 was the largest event ever done for this length.  Seeing other cyclists in the most remote places, and having locals waving to us, buoyed our spirits beyond belief.  In western Oregon, just a few days into the trip, a young girl and her mother came to our camping area with a cake and said how much they admired us.  In Kansas there was “the ice cream lady” who gave homemade ice cream to us.  She literally would chase us down in her car and take us to her home.  Nobody who cycled B-76 will ever forget the “cookie lady” of VA.  She had a home just off the Blue Ridge Parkway in VA and started giving out cookies to the cyclists.  To this day she still does and over the years she added a bunkhouse to give shelter to the cyclists.  She literally has become a legend on the trail.

Bikecenntenial is now known as Adventure Cycling but for us “old times” it will always be B-76.