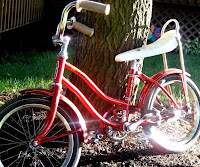 The story again, is that last March I saw this little vintage fuji bike on ebay for $25.  But it was in Riverside, CT.  At the time we lived in Charlottesville, VA, and it was too much of a drive just for this bike.  Since then, we've moved to Pennsylvania.  We have friends in New Rochelle, NY who have a had a baby recently.  We went to visit last Saturday.  Well, New Rochelle happens to be only about 15 miles or so from Riverside, CT.  I called Mark who was selling this bike back in March, and he happened to still have it.  We simply drove up a few extra miles before heading home, and picked it up.  This Lil' Fuji is for our two daughters, who will get many hours of enjoyment from it.  Just like my Opus III, I consider this a special gift given on this Fuji journey.
Posted by Matteo at 7:48 AM No comments:

Do you remember the Lil' Fuji I saw on ebay a few months ago?  The seller lives in Connecticut.  Well, it never sold, and I've contacted the seller to pick it up this Saturday.  We now live in southeast Pennsylvania instead of Virginia.  It so happens my wife wants to visit a friend who recently had a baby, and she lives in New Rochelle, NY, which is only about half an hour from the sellers house!  So while she is visiting, my daughter and I will go get that neat little Lil' Fuji kids bike for $25.  I'll update again and post pics after Saturday.
Posted by Matteo at 9:01 PM No comments:

I'm very excited about this!  I just spoke with Marcus at Ben's Cycle shop at 6th and Lincoln in Milwaukee.  He said I can store my travel case there while I'm in Belgium at my friend's wedding over Labor Day weekend.  I'm just not going to be able to get the kit to transform the travel case into a trailer before I make this trip, and General Mitchell Airport has done away with the lockers they used to have.  A good friend of mine, in fact, my first ever college roommate, is going to pick me up from the airport.  Then on the way back I will ride the trail.  I'm looking forward to this trip, and now that I have a solution for the travel case I can focus on planning and visualizing the ride.  Much thanks to Ben's Cycle.  I think I've purchased a thing or two from them before on ebay, and if you haven't checked them out yet, please do.  All I've read are good things about them, and for me they are living up to their name.
Posted by Matteo at 2:40 PM No comments: 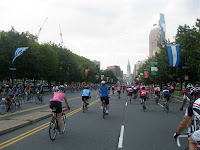 The inaugural Philadelphia Gran Fondo has already come and gone.  I very wisely chose to do the 32 mile route instead of the 62 mile one, which I was planning to ride.  I need to figure out what is going on with my left knee again.  I still think it is the illiotibial band.  At about mile 25 it started feeling bad, and to have had to ride another 40 miles would have been difficult.  I wanted to enjoy the day, not hate it.
This was a great introduction to cycling in Pennsylvania for me.  It is fitting that I rode in the first gran fondo here since we just moved to the area last week.  I was one of about 1700 people who participated in the event.  The weather was very nice, not too hot, and there was a comfortable breeze blowing.  The course had some challenging hills, which I was prepared for from learning to cycle in central Virginia.  There were some technical descents too.  There were a couple of accidents due to them early on in the first hour of the ride.  I haven't heard any details about them yet though.  At the break for the piccolo fondo, I befriended a small group of riders who I learned were from the Cadence Foundation.  Two of the kids and their coach broke off on the shorter route with me, and helped me to not feel too alone out there.  It would have been more fun to do this ride with a friend or two.  I didn't have anyone to hang out with afterward, but I'm still happy I did it.
I did almost decide not to even go.  There were some discouraging things trying to keep me from going.  Like I said, we had just moved, and the new space was still in disarray.  I was very tired, and hadn't been on a bike in a week.  I was worried about the illiotibial band situation with my leg.  I wasn't sure if I was going to make it on time the day before getting into the city to pick up my packet.  I was worried about parking.  The day of the ride I had my wife drive me to the Norristown transportation center to take the trains into the city.  We had to be up around 3:30am (after going to sleep after 11pm) to catch the only train that would have gotten me there on time by 5:20am.  Being unfamiliar with this train system I struggled to get the tokens and transfer I needed.  I was anxious about using the trains.  I wasn't exactly sure how to get to the start point from the station once I got downtown.
I'm glad I did not let all of the worry and discouraging feelings keep me from it.  I made it on the train okay.  My transfer was smooth, and there was even another cyclist on my train car.  I asked if I could follow him to the start point, and he was very friendly about it.  I had energy for the ride, and my leg didn't really bother me until close to the end of the ride.  It was a pleasure meeting the people from the Cadence Foundation, and I got a great new and helpful map of the Schulykill River Trail and surrounding areas from the Bicycle Coalition of Philadelphia.  It was a wonderful experience, and I would have missed it had I allowed those discouragements to keep me from it.
Posted by Matteo at 6:11 AM No comments: