You Can't Blame the Bike: A Road Bully is going to be a Road Bully

I was driving our car last Sunday on Main Street.  There was nothing unusual about how I was driving.  I was going the speed limit, staying in my lane, watching for others around me.  I prepared to make a right turn into a parking lot drive way, slowed down, maintained my line, put my blinker on in advance.  However, the driver behind me remained right on my tail as I did these normal (in fact required) things.  Not only that, but he crossed over into the other lane of traffic to pass me at the moment I turned, garnering a honk from the passing car!  Neither of us could believe his behavior I'm sure.  I couldn't restrain myself, I honked too.  As he passed, he was waving his hand up at me.  I don't think I saw the classic middle finger, but I wonder what kind of expletive he was speaking in hopes that I could read his lips.

I'm commenting on this because I was not on my bike.  I want to say that I usually only experience this type of driving behavior when that is the case, however, on further thought about it, I realized that I do in fact experience just as much driver hostility on our Main Street when I'm NOT on my bike!

What does this mean?  It means you can't tell me that I'm 'asking for it' when I'm out there on my bike because it happens even when I'm out there in my car.  The bike really has nothing to do with how others treat me on the road.

It is simply the ATTITUDE of other drivers toward my presence, my very existence, that puts me at risk most.  I am in the way, slowing them down.  In their mind, I don't have a right to be there (even in my car if I have to slow down to turn), and they want me to know how they feel.  So they put me and others at risk by using their car to be 'pushy.'

Why are Road Bullies so mean?  Where does their impatience come from?  Why can't they just slow down and wait?  Why don't they realize the danger they put others in when they let their bad attitude control the way they drive?

There is no excuse for that kind of driving behavior, and the responsibility lies solely on the driver.  I truly hope my road encounters never get more intense than what I experienced the other day.
Posted by Matteo at 10:42 AM No comments: 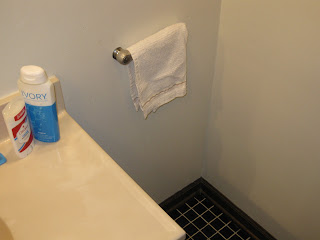 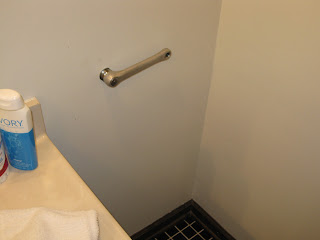 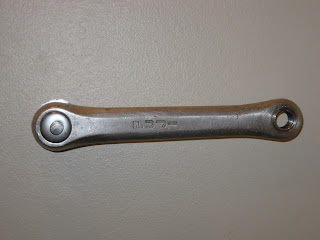 What are you supposed to do when you are left with just a left crank arm!?  Well, I acutally have the right one too, but I'm not going to be using this particular crank anymore (at least for pedaling a bicycle).  But I've seen people trying to sell just one crank arm on Craigslist and Ebay, and I think that is ridiculous.... UNLESS.... you need a small towel rack!

My wife asked me to put a towel rack near our sink so guests can have a towel they would be comfortable using.  I have one, but it is too long for where the wall studs are.  I didn't want to go buy one.  So, down to the basement I went to admire my old unused bike parts, and see if I could come up with something from them.

It didn't take long for me to put this together in my mind.  I immediately envisioned the crank arm serving as the towel rack.  But then I needed to space it out from the wall to make it easier to drape over the towel.  A fixed side bottom bracket cup served the purpose perfectly.  The outer flat side sits against the wall, and the inside threaded cup part sits snugly on the back of the crank arm.  I realized I could simply nail it to the wall, through to the stud of course, but I needed a washer for the nail head to push against.  The crank bolt cover itself is a natural choice and does the job perfectly as well!  Be sure that it is metal though, not plastic.

A side thought.... a variation or easy addition for extra hanging space could be to add a pedal (where it belongs anyway) or even just the spindle of a pedal.  Just remember that the threads are left handed, so lefty tighty, righty loosy.

So voila!  A shiny towel rack!  I don't have the verdict yet from my wife on this though, and I cannot promise you that you'll be able to get away with this in your house.  Hopefully I can though!  Of course it makes it extra special since this particular crank arm says 'FUJI' on it.  :)  Now everyone who dries their hands in our bathroom will realize just how 'Fuji Crazy' I really am (if they haven't already).
Posted by Matteo at 4:49 PM 2 comments: 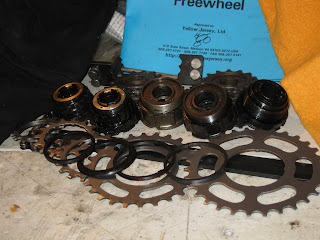 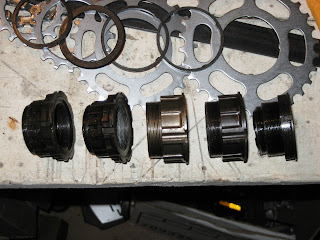 Back in the day, these bodies were HOT.  Oh yes.  And so it remains today.  There are plenty around who still lust after these beauties.

Their beauty lies in their design.  In The Dancing Chain, Frank Berto says, "The 1983 SunTour New Winner was the most flexible freewheel system made.  One body handled 12- to 34- tooth sprockets, 5-,6-, or 7-speeds, and narrow or regular spacing.  There were 42 different sprocketes available."  The narrow spacing is called Ultra (6 or 7 speed).  This Ultra design allowed for a 6 speed freewheel on a 120mm hub where usually it would have to be 5 speed.  Also, it allowed for a 7 speed on a 126mm hub where it was usually a 6 speed.

Berto also states in his book, "SunTour started the trend to narrower spacers, and narrower chains, which has led us to 10 sprocket freewheels."  Oh why oh why did Suntour have to die!?  They were also the company who invented the slant parallelogram design for rear derailleurs in 1964.  This design kept the chain equidistant to the cogs as the derailleur would move from larger to smaller sprockets, providing for more efficient, cleaner shifting.  They were a smaller, non-aggressive company, and once Shimano was able to use their designs after the patents expired, it was all downhill for them from there.

I had never heard of these freewheels before that fateful day in December of 2007 when I received my Fuji Opus III via Fed Ex from an Ebay purchase.  It came with a Suntour Winner Pro "straight block."  Straight block refers to the cog set up, and that there is only one tooth difference between each.  It was set up as an ultra 6 speed with 13-18 teeth (first gear was 13, second 14, 15, 16, 17, and sixth gear had 18 teeth).  I am not a racer though,  and that set up would kill me out on the road!

Thankfully, I learned that these freewheels had a lot of versatility built into them, and I could change my gearing without spending alot of money.  At that time, a wonderful community bike shop was available to me (Charlottesville Community Bikes), and I was able to find other Suntour freewheels at no or minimal cost.  At that time too, I was able to find some affordable ones on ebay.  Since then it seems, they are becoming more collectible and harder to find at lower prices.  Since the cogs were interchangeable with the bodies, I have been able to set up a freewheel with lower gearing so that I can handle the changing terrain of the road better (i.e. I can ride up the hills easier).

Over time I have acquired the Suntour freewheel vise tool, the 2 and 4 pronged removal tools and the chain whip so that I can take them apart and mix and match all I want.  I have to say I have quite enjoyed doing this!  I have become very nerdy in how I draw up my gear charts to compare all the different possibilites before I make a final decision on all of my teeth counts for the rear cogs and the front chainrings.  And even though I just mentioned that it seems harder to find them affordably, it is still possible to come across some of these freewheels for free or very low cost.  You just have to keep your eyes peeled.

Two of the best web resources for these wonderful freewheels are:

1. Sheldon Brown's site (of course)...
2. Yellow Jersey (Madison, Wi) If you are using the winner or winner pro freewheels, and think you'll get into taking them apart and putting them back together, be sure to get the very inexpensive tech manual ($3.95) from Yellow Jersey.  It is well worth it.