My Journey to Becoming a Music Together Teacher 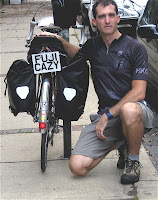 Click on 'view full route' below to see details of my ride from Collegeville, Pa to Hopewell, Nj.  I used ridewithgps for route planning, and it is an excellent resource.  I participated in a Music Together Teacher Training Workshop last weekend.  I had the opportunity to ride the 55 miles it took to get there, so I did.  Rain was a high possibility so I prepared well for it.  I finally bought the waterproof Ortlieb Panniers I've been wanting.  But not a drop fell from the sky on the day of the ride.  The next night I did have to ride 5 miles in the dark and rain though.  Those are not ideal conditions, but like I said, I was prepared for it with waterproof gear and very good lights and reflectivity.  It wasn't a problem.
A member of the Princeton Freewheelers, Ken, let me stay with him for two of my three nights that I was there.  I am very grateful for that.  It saved me alot of money, and I got to meet a fellow cyclist.  He was an excellent host, and I can't thank him enough for helping me out.
I was concerned about being chased by dogs, but that didn't happen.  I really hate it when dogs chase me.
My jersey from the Flwrider group in Hong Kong came just in time for me to wear it on this ride.  I was very excited about that.  Brian, the founder of Flwrider, remembered that I had asked him for some stickers of their logo while we were riding one day, and he put a few sheets in the package for me too.  I appreciate that.  The stickers look perfect on my fenders, and the one in front kept me motivated to keep going strong as the miles built up (especially the uphill miles).  It provided many good cycling memories for me of my time in Hong Kong.
I could have rented a car, or simply had my wife or a friend drive me to Hopewell.  It is only an hour drive.  But then I would not have gained the personal satisfaction of having made such a beautiful ride.  There really is a sense of freedom from being on the bike that just isn't there when sitting in a car.  I didn't want to deprive myself of that when I didn't have to.
I have not planned for a ride yet the way that I planned for this one.  I'm very unfamiliar with the roads around this area since I've only lived here for a year, and have not been able to get out and ride them yet.  One thing I did that helped was to simply google a bicycle route and then drive it.  Ultimately though I ended up only using part of that initial route.  I discovered that part of Adventure Cycling's Atlantic Coast section 2 route fit perfectly into where I was going more directly than what I initially had from google maps.  So I mapped out a good way to connect to it at Tennis Road in Ambler, Pa from where I live and used it the rest of the way.  That turned out to be a great strategy.  The whole way from my place until I connected with the Adventure Cycling route, I kept seeing 'BCP' painted white on the road with a small arrow under it.  That may mean the Bicycling Club of Philadelphia, but I don't know for sure.  It gave me a reassuring feeling though making me feel that I made good road choices when I put the route together.  I wasn't able to drive those roads before I left, so I wasn't exactly sure if they were the best choices or not.
I passed the weekend training activities, and can now teach the music together curriculum.  I look forward to beginning that process with Melanie, the center director for Littlest Music Makers here in the Collegeville, Pa area.  Music Together is an amazing early childhood music program.  If you haven't heard of it and have little ones, please check it out.  If you're lucky enough to have one in your area, you should do it!
I rode my fuji touring series iv.  It fared me well, and I look forward to my next ride on it.  Ultimately I plan on taking this one across the country someday.
Posted by Matteo at 11:08 AM No comments: 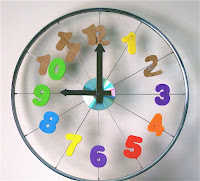 This gives new meaning to bicycle education.  It is time (no pun intended) to start teaching my 4 year old how to tell time.  Something I do fairly often with all of this fujicraziness is rebuild the wheels on these old fujis I find.  If the rim is aluminum  and still straight, I will reuse it and just use new spokes.  However, if the rim is steel I won't reuse it.  Steel rims are not good in the rain, and they are quite heavy.  However, they make excellent clocks!  Thirty six spoke holes makes for a perfectly round (no pun intended) number and sufficient space to fit all 12 numbers.  My daughter's bathtub numbers worked perfectly as I was able to push the spokes through them for stability.  I had to use cardboard for multiple '1's and I couldn't find the spongy number 2.  An old recordable CD and some heavy colored cardboard pieces for the arms finished it off nicely.  Every hour we go to the clock to see what time it is.  She is beginning to get the concept.
By the way, this is a Ukai rim.  It is this model that is most likely to be found on these old fujis, and they really are great rims.  They are usually just fine to rebuild with, and remain straight and strong.
Posted by Matteo at 12:37 PM 1 comment:

Bike recipients and volunteers before the ride home.

A bike mentor with a bike recipient during the ride home.
This video was made by Todd Gerarden and Amara Lewis.
In late summer of 2008, I read the book The Only Road North by Erik Mirandette.  I was inspired from that book to try and help the local refugees in my community, which at the time was Charlottesville, Virginia.  Through those thoughts I developed a vision of how to do that, and after a couple of months it came to fruition.  My vision encompassed volunteer mechanics from the Community Bike Shop working with middle school boys from Fork Union Military Academy to make bicycles rideable for local refugees who came to Charlottesville through the International Rescue Committee.  My friend Brian had loaned me the book.  He was teaching at Fork Union at the time, and it was his students who came and helped.
After quite a few weeks of communicating with everyone, we were ready to put the plans into action.  It began in two phases.  Phase 1 involved getting the bikes in working order.  We had 14 bicycle requests from the International Rescue Committee.  On a Saturday in October 2008, the volunteer mechanics and the middle school boys met at the community shop to do the work.  We were done by the end of the day.
Happy Rickshaw, a local pedi-cab business, let me secure the bikes for the week in the Ix warehouse space that they were renting.  This space was integral to Phase 2, which occurred the next weekend.  Phase 2 involved giving the bikes to the refugees.  This proved more challenging than it first seemed.  Most of the recipients were from Burma, and their English was minimal. The other countries represented were Bhutan, Nepal, Burundi, Iraq, and Afghanistan.  Many of them were still unfamiliar with basic driving principles on the road here, so bicycle safety skills were also a concern.  Thankfully, the Alliance for Community Choice in Transportation was able to help.  They provided helmets for everyone, and the support of the Bike Mentor group which gathered to ride each person back home.  However, the language barrier was more problematic.  I realized that I needed to find translators if I really wanted to get the safety points across.  I spent alot of time searching for them, and at one point was on a 3 way call with a company in Arizona to be sure that one of the recipients understood exactly where to pick up the bike.  After alot of hard work, I was able to find two translators who could be there with us on the bike pick up day.  Communication went very smoothly during that time.
After everyone had a bike, helmet, lights, and locks, we were ready to roll.  The Bike Mentors got everyone home safely.  It was a thrill, and it gave me great personal satisfaction to bring together so many different people to accomplish one goal.
Throughout the next year after these initial phases, I received about 10 more requests for bikes from the International Rescue Committee.  I worked on those bikes and delivered them myself to each recipient.  I would talk about safety issues, and go on rides with them as well when I took them the bike.  One person was walking to his job, which took about 30 minutes.  When I delivered his bike, we rode to his work together.  It took us about 7 minutes one way.  He was elated.  My future goal for this before I moved was to do more bicycle safety teaching with them through the International Rescue Committee before they received a bike.  Of course, one of the bikes received was a vintage fuji.  :)
Here is the break down of the people and groups involved for the first two phases:
Charlottesville Community Bikes:
Matteo
Fork Union Military Academy:
Activities director- Brian
Middle Schoolers- Nathaniel, Colin, John, Nathan, Daniel, Jesse
Volunteer Mechanics:
Sam, Eric, Sam, Nick, Charles, Todd
International Rescue Committee:
Terri, Sarah, Courtney
Alliance for Community Choice in Transportation:
Caroline
Bike Mentors:
Shawn, Steve, James, Nick, Vince, Andy, Dave, Greg, Mandy, David
Translators:
Donald, Gawng, Thet Thet, Fatin
Bike Recipients:
Som, Deo, Keshar, Lian Lam, Malud, Pa Ma, Gasper, Najiba, Jardin, Ngwe, Wah Wah, Atiq, Farah
Posted by Matteo at 9:54 PM No comments: