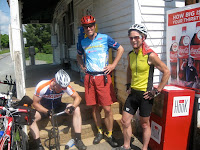 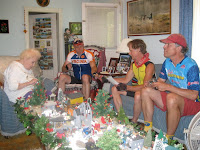 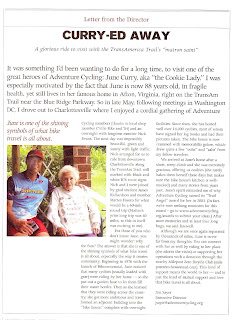 Last May I was fortunate to be included on a ride to visit the 'Cookie Lady' over in Afton. Jim Sayer, the Executive Director for Adventure Cycling was visiting Charlottesville, and he wanted to meet the renowned woman who has been providing lodging and amenities to cross-country cyclists since 1976, on the nation's first identified bicycle route 76.  This was called Bikecentennial.   My friend and experienced cyclist Nick Evans arranged for the ride with him and invited others along, including me.  In the above picture on the right you can see from left to right, James Richardson, Jim Sayer, and Nick Evans.  We rode 58 miles round trip to visit June Curry.  She was home and shared many of her stories with us.  The apartment she provides to cyclists is full of memorabilia from the past 34 years!  It truly is museum-like, and and was something to remember.  If you get a chance to see it I suggest you do.  Jim was nice enough to mention me, James, and Nick in one of his next opening letters in Adventure Cycling Magazine.  He specifically mentions me and that the ride was my longest to date at the time!  Thanks Jim!  I want to mention that during that ride, I rode up Afton Mountain with a 22 inch gear on my touring bike.  I had to stop midway for a few minutes to let leg cramps subside before I continued up at about 3 miles per hour!  (WEENIE!)  But, later that summer when I was helping to coach the Boys and Girls Club Cycling Challenge Team, we rode the same route a few times, and I was able to ride up non-stop going at least 7 miles per hour in a 46 inch gear!
Posted by Matteo at 3:43 PM 3 comments: