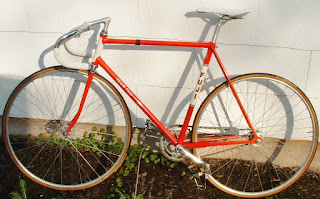 I just listed my beautiful '82 track bicycle on ebay.  I also have it on Philly Craigslist.  I am selling it because I am purchasing a grand piano, which will be more useful to me.  I teach and play piano, and after years of looking for an affordable grand I found one a few weeks ago (on mother's day to be exact).

Though I rode this bicycle at the velodrome in Trexlertown, Pa in an adult class, and had a wonderful time doing so, I am not a racer.  I live too far away to go regularly, and if I do, I can simply ride my Fuji Royale II.  It is a wonderful bicycle in its own right.  In fact, if I have to keep only one of my Fuji's, I have decided that the Royale II is it.  It is light, comfortable, fast.  It would do well on a long tour, around town, and everything in between.

I am hopeful the track bicycle will sell soon.  I know I'm going to take a hit on value.  In my mind, it is worth over $1000.  I know I won't be able to fetch that though, so of course I have relented on price.  At this time it is just more important to me to acquire the piano.  I really want to have a grand style action for my own practicing, and it will be nice to have two pianos to do ensemble work with my students.

I have good memories with this bike, but I know it is time to let go of it.  It doesn't belong cooped up in my basement any longer!  It needs to get out and fly.  I am releasing it to a new life; a renewed life.
Posted by Matteo at 8:38 PM No comments: 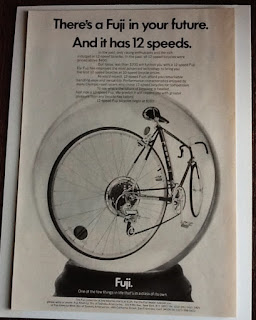 Today we salute you Mr. Head-Shaker of Disdain Driver.
Its obvious you really know your stuff.
(You really know your stuu-uuuff.)
If you see a cyclist trying to "share the road,"
You're NOT going to like it, and everyone else is going to know it.
Nobody on the road is immune to your watchful eye.
Especially if they're not in a car.
(Get a car you idiot!)
But you don't revert to yelling or cussing.
Mr. Head-Shaker of Disdain Driver is too civilized for that.
(You're so civ-il-iiized.)
You just think those words, silently, in your head,
as you shake it back and forth at your victim.
(Thinking and shaking.)

Posted by Matteo at 3:29 PM No comments: